A friend of mine asked for some help the other day. Knowing i was a bit of a tapestry geek, she sought my advice and a little guidance in making a pair of tapestry cushions. Just talking about the stitching filled my head with posibilities, both new and old. Of things id done, wanted to do and also of the dreams that would never materialise.........in tapestry, im talking. Not world domination, just stitches. (But that is the world to me, as i know it.)
So i decided to get another project started.....but can i say 'started' as technically i already started it, ok, so just pick it up where it got left over year ago.
I had this plan, way back, to make couture wrestling masks. Not the tacky, cheap run-offs that they produce for tourists in Mexico but individually hand sewn and a bit flamboyant. I have to date, made just one. It appears in an early post and if not, its among the slide show pictures. The idea was to create many of these, at least 30 and then display them on a rack as if they had been hung up to sell just like the ones previously mentioned. You probably already know i have a bit of an obsession with masks if you have seen my pictures, though do not ask me why as i wouldn't know. It is something that crept up on me and before i realised it i was makking them in multiples.
So as i was explaining...
My friends prompt reminded me of my lack of 'unusual' creative makings and i have decided to step back into the field and make yet another mask, to get me a step nearer my target. This time i have decided to work on a tapestry version and without an exact plan as to the final look, i will just work it as it goes along. So far i have drawn the canvases up with a simple repeat of coloured squares. The decoration, embellishment and edgings, will come to me when the tapestry parts are nearer completion. It may take some time as even though i love love love my tapestry, even the great obsessives can find the monotiny of this task all too familiar. So dont hang around for the finished item, it may take a while. 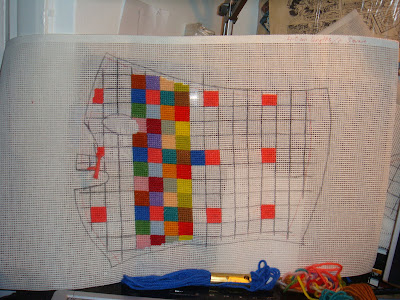