Whipped up in a zoo frenzy

So I got a bit carried away after I started the new 'techno' elephant.

I had only just stitched him up and immediately I thought, 'what the hell am I doing? I promised myself same classic styling, but I've done it again, more of the 'crazy' that I keep trying to veer away from'. As I looked at the empty skin of the animal I decided that was it......... this one I would sell and I would make my daughter another one, a more realistic, plausible creature. So I found some dusty lurking fabric from under my desk, which happened to be a nice handwoven Harris Tweed and stitched up a camel skin.....it was only then I got a little bit excited.

I decided there was plenty of space in the living room. Having still not worked out, how I was ever going to get a sofa or a TV, ( even the British Gas man thought we'd only just moved in.....No Mr. we've been here 7 months.) I just cant work out what this 'living space' is for. Its too small for a sitting room and a dining room. The flat is also too small for me to have a studio and so the result has pretty much been, that if I can't have all three, I shall have neither. And there it is, this useless room, void of proper function has been demoted to, 'the other room'. Ridiculous I tell myself but I've not done a lot about it. I'm very much an 'all or nothing' sort of a person. And the current stance is definitely 'nothing'.

But here is my effort to change all that. "Bring out the fabric, pass me my threads and let me add a little touch of my own crazy", though just a touch mind.
I stitched and stitched, like I used to back at college, in those days gone by, feint as they are though not that long ago. Pulling another all-night er, I sung along to music feeling rebellious knowing that my daughter was asleep the other side of the hall whilst i was clutching at my old life with wide eyes and a feeling of excited sickness in the stomach that always seems to go hand-in-hand with the college all-night er. By 2:30am I had another two creatures.

Enter....A grey corduroy elephant and a brown horse. So simple, so refined, So 'what the hell are you thinking!' These animals are really large once stuffed, that to have three in the house, let alone the same room would mean any visitors would have to stand in the hall, or possibly sit on the loo if they were to drop by. I wonder if I can stack them to make space when I need it..........?

The next issue before all this, is actually to stuff them. They take about 5kg of stuffing each, possibly even more if you want them to be firm enough for your child to sit on and for them not to crinkle. Where or how i will afford to get that, i have no idea. So far my Freecycle request for old duvets has not yielded any delights so i may have to get thinking or I'm going to have to save up big time. In your average sewing shop, this amount of stuffing would cost over £140!

So for now, I present you with empty animal skins and I will get back to you when I've got them stuffed and ready for show. Keep your eyes peeled. I'm quite excited that they will turn out to be a big hit. 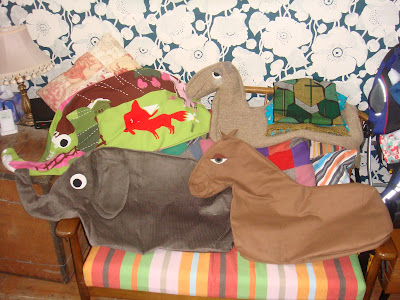 (excuse the competing upholstery and wallpaper patterns, this was just a working shot)
Posted by lauralai at 13:37