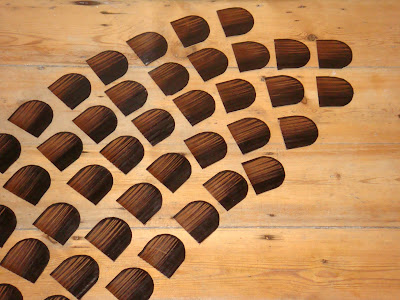 Today was one of those wonderful days, that when they come along, I feel joyous throughout my veins. Maybe the weather had something to do with it. The powers that be, have a strong hold over our physical selves. I'm not talking simply about sun= happiness, as I'm sure you realise it runs deeper than that. But anyway, there was a glint in the sky and a light inside me too. The desire to create and let my thoughts run away with me on a magic, fire fueled ride. I had but started one project when the next etched itself in my head. With excitement i hurried as fast as i could to complete what i was doing and then start the next idea. Its like a run-a-way train speeding in my head sometimes.

Today I completed the cardboard house. I decided not to draw over it in the end, my pencil skills are not what they should be. Instead i decided to patch it with cardboard pieces and i think it has turned out to be quite effective. 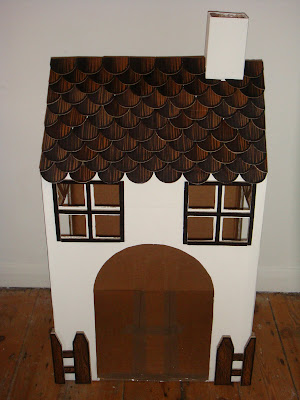 The front with its large open doorway. This entices the child in and makes it seem friendly and nonthreatening. 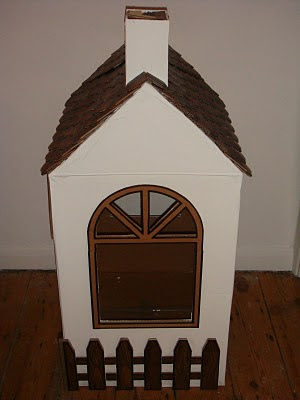 The side views are identical. Arched windows, large and low. Objects can be pushed in and out and you can even climb in if you want. Wooden picket fence adds depth and pattern. 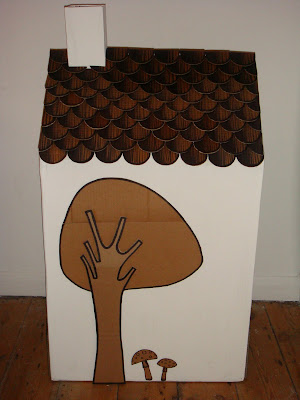 A tree and two toadstools on the back of the house, add a little surprise should the child push it out from the wall or walk behind it. 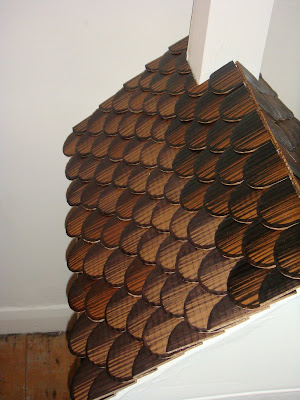 The roof took a while to make. There are over 160 individual hand cut tiles, cut from 7 by 7 squares, then hand shaded and varnished before being fixed into place with trusty old UHU. It was an experiment which turned out to be an interesting texture. 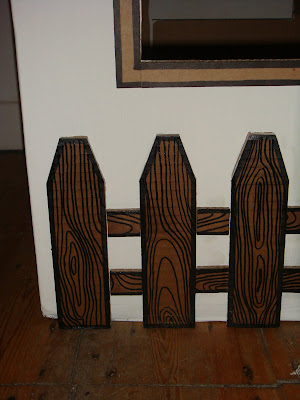 The picket fence adds a finish to it, that grounds it and breaks up the large expanse of white wall. It was really simple to make, with a little tiny bit of mathematics.
This house has been made entirely from cardboard boxes that you can pick up free of charge from shops or supermarkets and the only cost is glue, paint and marker pens. Its so much fun to make and i don't know why more people don't craft from cardboard. Its free and you are only limited by your imagination, or someone else's!
So I've finally finished the house, it did seem to drag a bit. I had no plan and just made it up as i went along, which was fun but then i just kept adding more. My little girl already loves to play in it and takes lots of her toys in there as well as tries to climb in and out of the windows. If i had a bigger house myself, it would be great to create a whole village of little houses and shops but in our rented shoe box flat, that would just be crazy, especially as we already have the zoo coming to live here.
And as i was trying to describe, my head has been going wild with ideas. I want to make a totem pole of zoo animals, really just stack them from floor to ceiling. All because i want to see it and admire it and then take a photo. Pure and simple. So much work for such a short finale. But I've got three stuffed so far and i will just see how it goes. Lots of people have suggested i sell them and are surprised when i say I've made them all for my own daughter, which i didn't think was strange but then maybe i can see it is a little excessive.
Ive also had ideas to make a large floor cushion for her bedroom to replace the folded quilt and pillows. A bit like a sofa or some kind of small mattress but specifically designed to sit on the floor.
I also got quite carried away with another idea of how to turn my white wicker nursing chair into something more functional and pleasing but that is one to add to the list as i can see it taking a long time. The idea involves stuffing lots of tiny little fabric balls of different sizes and clustering them together all over the seat of the chair to create a kind of fixed cushion pad.
With no sign of creative block or lack of energy, I work into the night and that is where the secret joy of obsessive crafting lies. Its when you are fueled and nourished by your doings, as though you were in a bubble quite separate from anything else and your work is everything in that existence. That is where my happiness lies.
Posted by lauralai at 18:03