There will be nothing new posted here for a couple of weeks or so. My daughter and i have both been taken ill. Im contagous and shes not allowed to even see me. Boo hoo! We have left London and i have not even taken my smallest needle or reel of thread and i have absolutely no intention of even the most secretive stitching. (serious) So until we have use of all limbs and good health im afraid there will be nothing fun to look at or ideas to try to make. Until further notice......
Posted by lauralai at 04:18 2 comments: 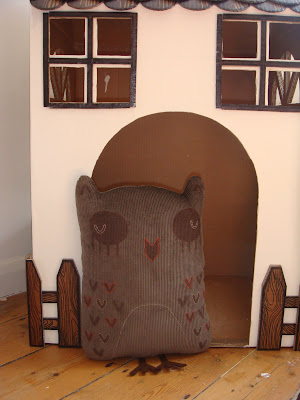 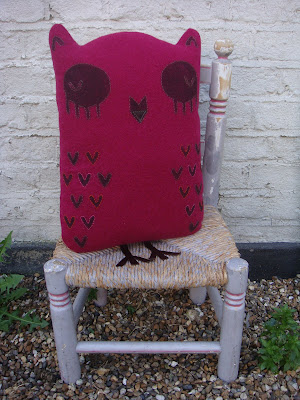 Two more cushions. Probably another two more to come....... Ive changed the foot shape and got rid of the tummy patch and i think it looks better than the first.
Posted by lauralai at 12:52 No comments: 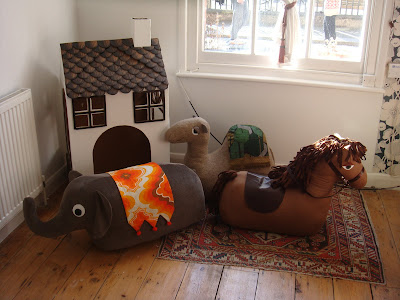 I've finally finished out little zoo. These are the only ones we are keeping. Ive still got the colourful disco elephant to sell but im not sure if there will be any more now. I got quite rashy from all the stuffing (which is by far the hardest part) and im not sure i can go through it all again, not with my sensitive skin....plus i'd need a barn to keep them all in, its already feeling a bit like sardines in here. It was fun though, I do like looking at them and my little girl loves to jump and sit on them. Pity i didn't reach my secret aim of making a stack of them up to the ceiling. I worked out that i'd need to make another 5 or 6 and as ive already made 5 (yet only got 4 here), it seemed like a ridiculous task to put on my list seeing as ive already got so much to do. In another life maybe. Otherwise, task completed. Phew.
Posted by lauralai at 04:19 No comments: 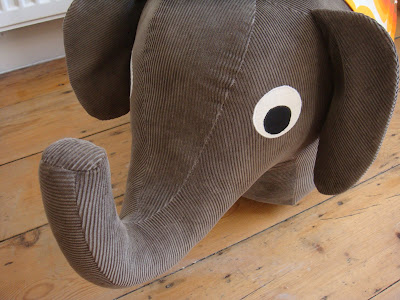 Meet Erol the Elephant. He's been sitting around for ages, waiting for a blanket. I sized him up for 50's blue flowers but he didnt like the texture of the fabric (it was too scratchy and a bit too girly). So eventually i got this bright retro print which id had my eye on. I bought it from this lovely lady. Im a bit jealous of her gorgeous fabric cupboard!
Erol likes to play games, he's gentle but strong and most of all he is dependable. He doesn't much like having his pom pom's pulled but that's children for you and Erol just plays along! 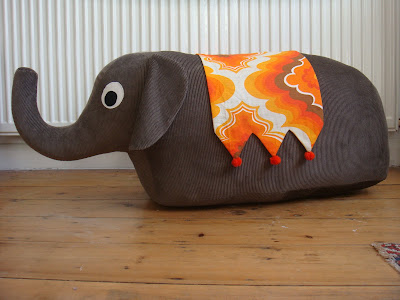 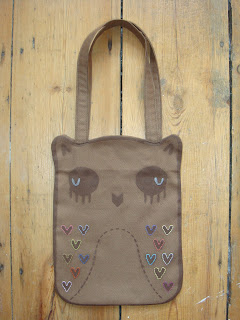 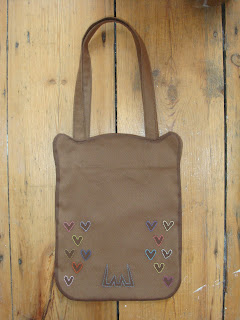 This little owl bag is a child sized shopper. I will be making a whole bundle of these for a party but so far this is the first one. I need to sort out a screen to print the design instead of stencil it and i also want it fully lined so that it is completely seamless and smooth at the opening. Im still dreaming about overlockers. I may just have to give up nice food for the rest of this year, as i could then afford one. Diet of porridge and turkish pitta starts here..........
Posted by lauralai at 12:45 1 comment:

"Too witt too woo" 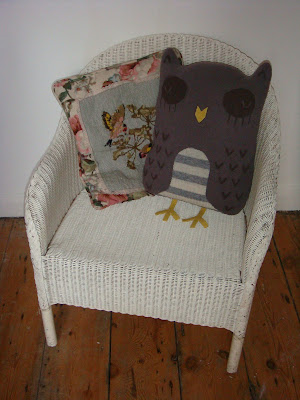 First owl, he's a cushion. Cashmere, lovely and soft. I think he could have done without the added stripes and should have a stencilled pattern on his tummy instead. But practice make perfect........ If i find more jumpers, i shall indeed practice. Next up, little bags i think. I have just cut a mini owl stencil. Give me a few days, me and the little one have got yet another cold. Boooooo!
Posted by lauralai at 17:11 No comments:

There will be a parliament shortly....... 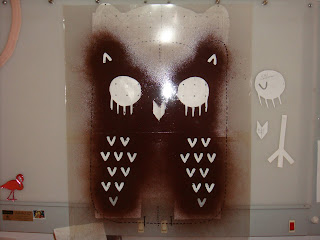 This is the early stage of my next project, which i feel will be a lengthy one. All i can say is, there will be a 'parliament'! Id prefer a 'hoot' but that's not correct terminology. Bet you've already guessed, they are everywhere, everyone's making them in some shape or form. Im just following suit. Copycat!
Posted by lauralai at 12:10 2 comments: 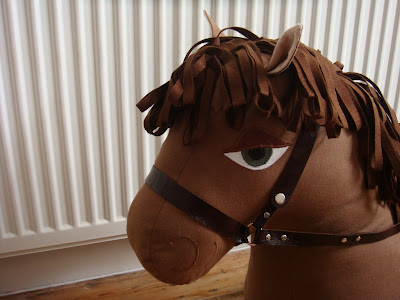 Meet Hunter the horse. He is pretty much, almost, nearly finished! Just a bit more leather work and detailing left to do. He is generally quite chilled and prefers to trot than canter. He likes to take things easy but also takes pride in his appearance. His main concerns are, having his mane pulled or having banana and chocolate coated sticky fingers run through his tail. I have promised him a good wash and groom should this happen......and inevitably it will, at some point. 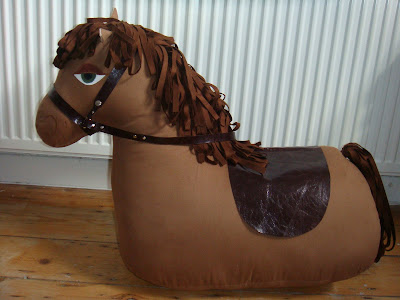 (We are just waiting for the last elephant now. Who is busy looking for a blanket before he reveals himself).
Posted by lauralai at 11:58 1 comment:

No name, looking for a home 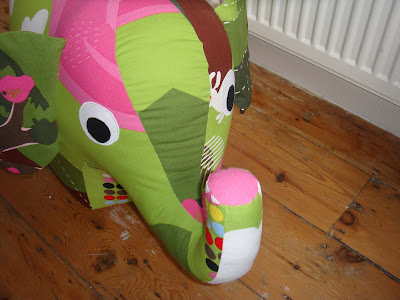 This is the crazy print elephant, finally finished. He was only waiting to be stitched up and have his ears put on. He's a bit wrinkly, but then, aren't real elephants.....yes i suppose. He will not be staying with us in our little zoo, unfortunatly and is currently looking for a home. Hence he has not got a name, he is waiting to be named and loved by a special little friend of his own. No name likes to lie on the sofa and dream of a family of his own to love and be loved by. 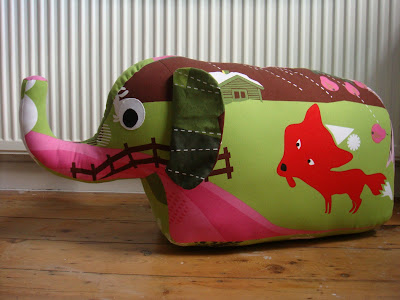 Posted by lauralai at 11:29 No comments: 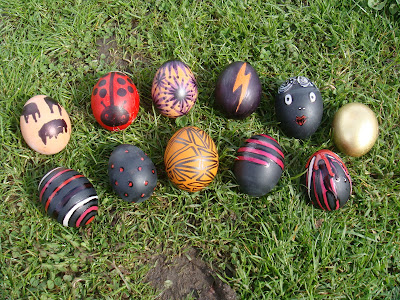 Today we went to the park, to par take in Egg rolling. Basically this involves bowling eggs down a hill to see which egg travels the furthest distance without cracking or breaking. Each contestant previously hard boils their egg and decorates it in their chosen style to distinguish it from others. Some methods of decoration can either strengthen or weaken the shells, which means that each egg is very different from the next. Shape, size, time of boil- are all factors in the science of finding a winner!

Here are some of the eggs that we bowled. 'Thunderbolt', back row, third from right was the overall winner. Combination of owners strong bowling arm and slick design must have been factors. Runners up were Golden dream and Pink typhoon.

Conclusion: very childish but a lot of fun. Next year we will get serious and place real bets. (Im going to work on my laquered, crack-resistant glazing).
Posted by lauralai at 10:54 1 comment: 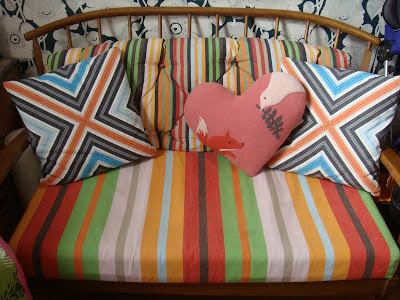 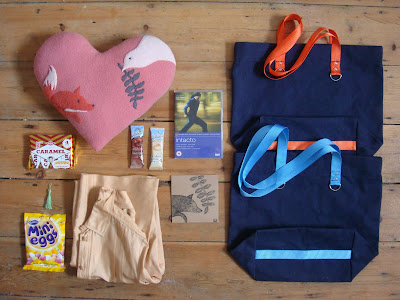 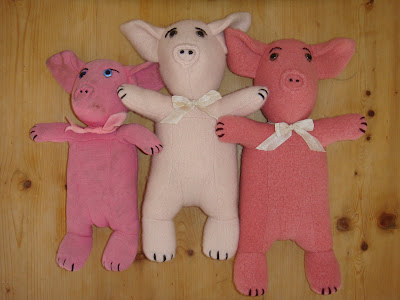 I have finally finished one of my queue jumping projects. The 3am killers!

This should have been simple but was not so. The idea was to recreate a little pig toy that belonged to a friend of mine. It was one of her childhood teddies. Whenever we went round to her house my little girl loved to play with 'pink piggy'. She lent it to me so that i might be able to copy the pattern and make one for us to have.

Of course, i gave up pretty quickly. After sitting down for about 20 minutes studying it, i decided it was too complicated. The original teddy was made in the late 50's i think but the pattern could well have been earlier. Lots of seams all end at the same point. The seaming is quite odd and very unusual. You definitly would not make a soft toy like this these days. Im not sure the point of it really but it is interesting to look at. Anyway i returned the piggy saying i was not that dedicated to the task.

A while later we were round my friends house and out came pink piggy for entertainment. My friends mother was there and she told me a lovely story of how her mother made her this little pig originally when she was tiny. When she had a daughter of her own, she found the pattern and made a piggy for her daughter, (my friend). So the pig on the left is the second generation, belonging to my friend. the original pattern has long since been lost unfortunatly.

When my friend went into hospital to give birth to her first child ( and last she tells me! a week ago), it took a lot longer than we all anticipated. She had a tough time, not the best experience but they both pulled through and are now doing brilliantly. I thought of what i could give to the newborn and had the great idea that i was going to give piggy another go. I got her mother to sneak piggy out to me one day and set to work. Literally night and day!

I made a pattern from looking at the outside of piggy as i obviously could not take him apart. Not so easy when the item has been pulled about, loved and washed for over thirty years! Then i made up a sample in a pale pink cashmere. Piggy was big! Must be my choice of fabric as it stretches when stuffed. I then altered some pattern pieces and re-made him in the final fabric. A salmon coloured felted wool which was a jumper that my mother recently shrunk and passed onto me for such purposes.

Piggy seems even bigger! I have no idea why, i can only deduce that my little one has been sneaking him chocolate buttons while i have not been looking.

And here my piggy making ends............ Im glad he's finished, even if he turned out quite different from the original and is the size of a small baby. Ah well, we will have tester piggy then. He's a bit ugly as i gave him stern bushy eyebrows but im sure my little one wont even notice, as she stuffs him into the kitchen bin.......sigh!
Posted by lauralai at 07:30 No comments:

These 3am late nights, have caught up with me. Im suffering from tiredness and a mega sore throat, not to mention aching bones and swollen glands- attractive. Some lovely people dropped a survival package on my doorstep the other day.  From its contents i have devised myself a sore throat remedy. Honey and lemon is dull. Its more a tea than a soothing remedy. You need a kick and more of those good vitamins when you're ill. So this is what i have been drinking these last days:
Into a large mug, put:
200ml of freshly bolied water
juice of 2 small oranges
juice of half a lemon
1/2 tsp quality honey
1/2 tsp of glycerine
MMMMMmmmmmmmmm. This will help me hack my way through my list of crafting.
Posted by lauralai at 07:01 No comments: