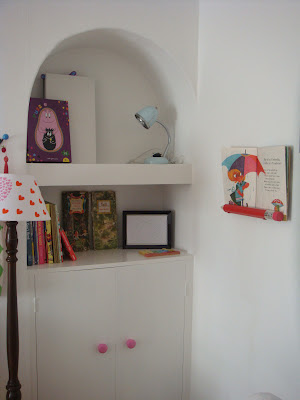 I'm due to give birth at any moment and in stereotypical hormone fuelled madness i decided now was the time to start some DIY projects that i would never normally attempt. Crystal Maze style, racing until the timer is up and i'm locked in with new baby. I have re-decorated my bedroom, freecycled/ charity shopped and thrown out most of my past life, pre- kids. Then built some shelves for better storage and basically just painted a white canvas ready for the new one to come and make his mark. Then i also decided to put a fitted, built in cupboard in the living room, to hide my silk screens, dehumidifier and sewing machines. Keeping them within easy reach but just not on display. Why i even thought i could manage to build a fitted cupboard in our late 1800's flat with wonky walls, and floors...i don't know. All i can say is these hormones are amazing. If it weren't for the huge belly getting in the way, i'd bottle this and use it as a miracle potion!

Now i'm not claiming that my work is particularly impressive, more that i'm 39+ weeks and i've been drilling and sawing like a mad woman. And despite it all, i actually managed to pull off what i set out to achieve and without any problems. That is the impressive part.... or at least i am impressed with myself! 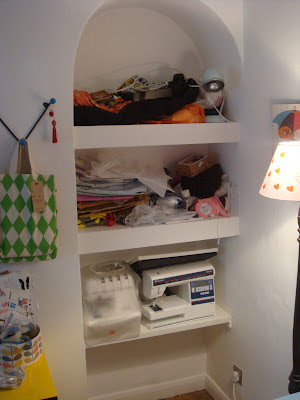 The shelves of dumped junk i wanted to sort out 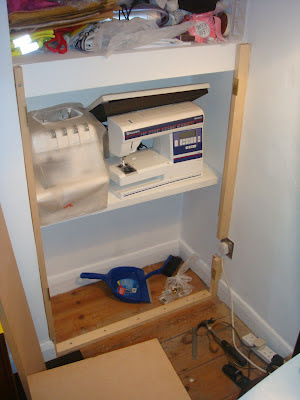 First i had to build the frame. It needed to clear some tiles on the floor as well as an electrical socket that was exactly in the way. It also needed to be exactly level so that the doors would fit without problems. The whole alcove was a bit wonky, not to mention the floor even sloped but my new spirit level helped.

They even gave me a free saw at my local woodshop! A pregnant lady doing DIY is obviously a bit of a novelty. They all know me at the woodshop, its pretty much a second home. Its an amazing privately run hardware store with everything you could ever need. A cavern of delights. But its actually closing for good in a month. Due to retirement of the owners- im pretty gutted, i almost cried when i found out. 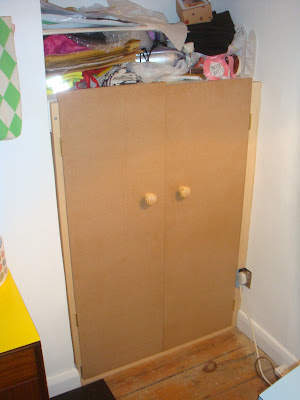 Levelling the doors at the bottom. You can see the shelf at the top is also wonky. It will need re-making. 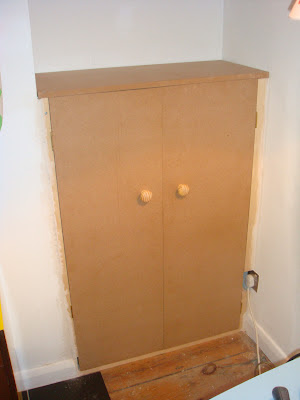 I fixed the doors and fitted a new, level shelf, then filled around my framework. There has to be a hole for the electrical socket as i plan to use it often and didn't want to wire some kind of complex extension cable. 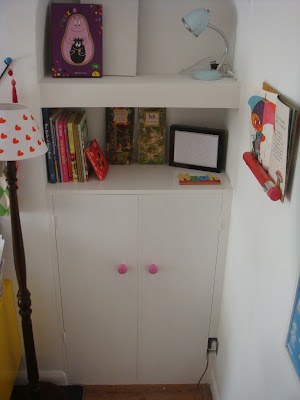 Its finished! I know its very plain, no beading or decoration but that's kind of what i wanted. My daughter requested that i painted the whole cupboard pink and i refused. We had a little discussion about it and on compromise i said we could have glossy pink handles. But that the cupboard HAD to be white! She's sort of happy. Next project... the lamp stand! Thinking a re-paint and to get rid of the hideous ikea lampshade. Baby may come before but equally i could be waiting another two weeks before they force him out. No point in twiddling my thumbs.....must keep busy.

Posted by lauralai at 02:25 No comments: 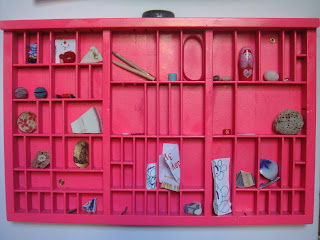 My daughter has been 'collecting', mostly junk and really random things for quite some time. It started with an episode of Charlie and Lola, in which Lola really doesn't get the idea of collecting things that are the same or alike one another. Her brother Charlie tries to explain to her, though in a way she doesn't really grasp the concept of collecting and i guess that's kind of what happened in our house too. Having gotten fed up with constantly having twigs and random bits of rubbish in my bag, my pocket, in my bedroom, the kitchen, well just about everywhere my daughter would stash things, i decided to get her a place to store them. She always referred to these things as her 'Clection' so it seemed only fit that we should collate them and she could try and take ownership of these items. I got an old type set tray and as it was really shabby decided to spray it. She requested pink (eugh) and i dutifully obliged. However the can i had ran out and when i thought i got the same pink it turned out to be neon. So here we have one shoddily coated tray with a rather equally odd collection of things. She loves it and is still collecting and I'm just happy i don't have to walk around with this kind of stuff in my pockets anymore. All happy. 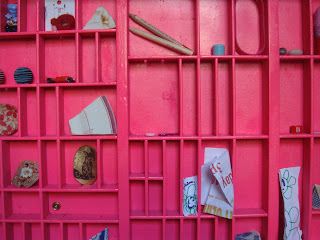 Posted by lauralai at 06:55 No comments:

Curtains with tie back pegs

We had to get some curtains up as our living room blind broke and living in a ground floor flat with our window right against the pavement, it was pretty urgent to keep the prying eyes out. I never used to bother pulling the blind down except when we had guests to stay but after an entire family pressed their noses up against my window one day, just to have a snoop, i felt a little exposed and had to consider closing ourselves off from the outside world. Not to mention our flat was a real dump before i did any DIY and now i don't really want our lovely little world on display for all to see and snoop in at. Its our hide-away, a safe little corner of fun and colour and of course the occasional tantrum! (ahem) 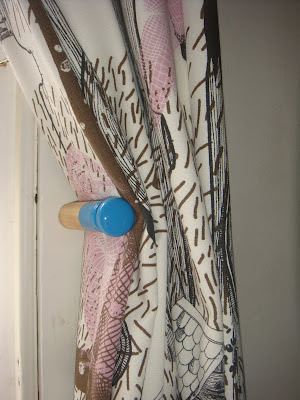 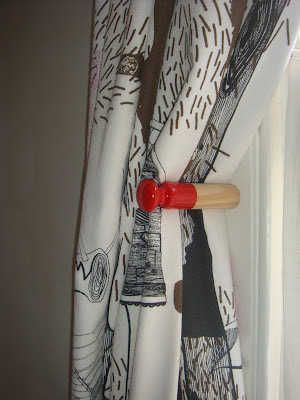 These were made from a heavy weight cotton canvas designed by Kristine Mandsburg, a Danish illustrator who has a really strong graphic style with a slightly dark edge. I really like her use of line in this print but i would have preferred the fabric without the pink birds...then saying that it matches really well with our Pirum Parum print that sits in the same room. So i quickly stitched these up and then put up another two of my wall hanging pegs as sort of tie backs i suppose, i didn't have anything else and it was a bit of a rush job. They work though, so its all good!

Posted by lauralai at 06:35 No comments:

These again, were made just before Christmas and you may also remember them from our Christmas pop up shop as they were the display hooks that we used throughout, to hang bags and clothes. They stemmed from a love of the iconic Eames Hang-it all  of which i still covert but cant quite justify on my budget. With the obsession for bright coloured gloss objects still fresh on my DIY list (you may also remember the bathroom light pull i made), i decided to come up with an interesting sort of coat hook or display peg that could be used for the numerous hanging items that we wanted to display. They were specifically designed for the shop but i had the intention to develop them or use them after. In principal they are very simple to make. I got a few wooden broom handles from my local independent wood shop, a bargain at £1 each, as well as a large bundle of small wooden door knobs, a bit more pricey at £1.25 each. Cutting the broom handles up into various lengths i then drilled down the length of each piece, from both ends about an inch and attached the door knobs using double ended screws. The next bit was a little less professional as i did a strange fill job around the join as the diameters were not an exact match and i wanted a smooth rounded finish. After this i then painted the knobs and a specific length down the stem of the pegs using enamel paints. Having masked the pegs first to ensure a perfect edge to the painting. When dry i used another double ended screw to fix the pegs to the wall. Very simple to fix to the wall and then fun and colourful to look at. I made about 20 or so of these and have finally started to use them around the house. They always get compliments and indeed one person from our Christmas shop enquired how much they were to buy. However if they were to be produced for sale they would need a fair bit of improving but for now, in my own home, I'm happy with them.  I have just put a bundle of them up on a wall as well as used them as curtain tie backs and also as a wall lamp hanger. 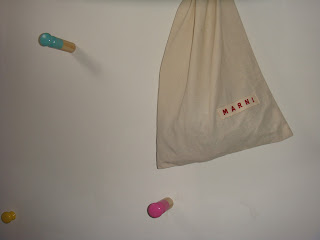 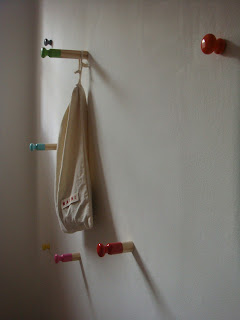 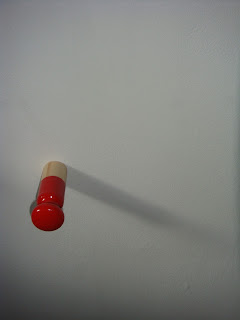 Posted by lauralai at 05:15 No comments: 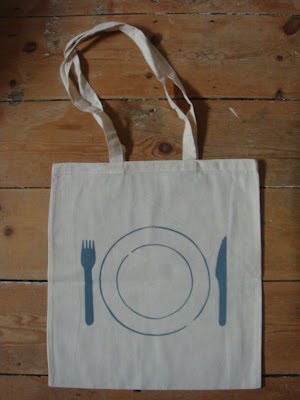 I actually made these just before Christmas. You may remember the dolls/teddy bears picnic blankets in pink or yellow with the same grey print. These bags were the original product, which i designed the print for but ended up never progressing from the sample stage and have still not been finalised. The idea was that each bag would come with a set of pens so that you could draw your favourite food onto the plate. I experimented with different fabric pens and couldn't quite decide what to go for...the type that is permanent or the type that washed out each time you wash the bag! Then the bag itself became a bit of an issue. It was obviously easier to buy ready made bags to print on as they are cheaper and easier to produce multiples when printing but i didn't much like the quality, always preferring the type i make myself, using quality canvas and careful stitching. These of course were costly to make not to mention very labour intensive. I however have a bundle of these samples that i give away and still hope to get back to producing them properly one day in the future.

Posted by lauralai at 04:30 No comments:

So I'm absent again..... i have two weeks left  until i give birth and to fit the stereotype, i have decided to re-decorate........ my room and desk area this time. It wasn't even on the list of things to do, there are so many other jobs on that A4 list. I just hope baby will be on time, or even a little late as our tiny flat is again mayhem, not to mention the builders are coming to work on the hall floor tomorrow. This sounds fancy but actually they are just trying to fix the shoddy job they did a few months back where they laid paper thin laminate in our rented flat, which of course has all buckled and resembles something more of a trampoline than a walk-able surface. So stay in there baby while i get my drilling and paining and saw-ing done, that would be helpful.
Posted by lauralai at 23:18 No comments: